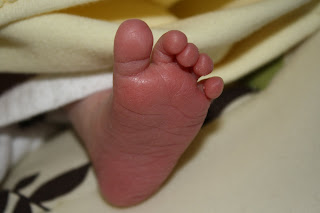 This past two weeks have been both the shortest and the longest of my life. I can't believe the chicklette is already two weeks old, but each day seems so long and action-packed (seriously -- even though it couldn't be further from the truth!) that if someone told me she was two YEARS old I wouldn't argue.
I'm still working on my birth story -- not that anyone really cares anymore, but I want to get it down so that *I* don't totally forget -- and probably a post on the wonders of breastfeeding. It is a THORN IN MY NIPPLES.
Tomorrow we may actually try to get out of the house with the stroller. You know, that thing we just HAD TO HAVE because we weren't going to be one of those couples who holed up in the house with our baby? Yeah, not so much.
And then I plan to curl up in a fetal position and rock back and forth in terror at the prospect of my husband going back to work on Monday and leaving me ALL ALONE. With another human being who is totally dependent on me for everything (including making sure that Netflix keeps episodes of Gilmore Girls arriving at a regular clip).
Eep!
Posted by Barefoot at 7:19 PM

Labels: life with a newborn

Look at that little foot!!! I'm glad to hear you are doing so well! I'll look forward to the birth story and the info about how breastfeeding is going since I can't get enough information at this stage! Overall, though, you sound great:-)

I love the little foot. How cute is that???

Such a cute little foot - I'm sure the rest of her is equally cute. Hope the breastfeeding experience improves - I've heard from so many women about how hard it is. Freaks me out a little. On the other hand, good to know.

Thinking of you often!

So even though you haven't asked your readers to delurk during delurking week, I just wanted to say "thank you" for your blog. We were on the same IVF/pregnancy schedule (I cycled in late March, and gave birth to a daughter on December 19th). Your blog helped keep me sane during the whole IVF, pregnancy post-IVF process.

And to try to return the favor, let me say that yeah, breastfeeding is hard (I had no idea the phrase "traumatized nipples" existed before last week), but it can get much better very quickly (for me, that involved a great lactation consultant).

Breastfeeding was VERY hard for me at the beginning. I almost gave up many, many times, but after about 6 weeks, things got a little easier. I was able to nurse my oldest daughter for 15 months, and my twins are 15 months old now and are still nursing. It's a neat process if you can get past the beginning.

Wow. I can't believe it's been two weeks. I can only imagine how you must feel. Cute foot. And cheers for getting you and that stroller out of the house. I hope I am that motivated too!

I LOVE GGirls. I freaked out when my husband went back to work. I had a lively 1 year old bouncing all over my house. Maybe the chicklette will sleep a little more than my babe.