The good, the bad, and the stinky

So, we're back from our chicklette-moon.

Let's start with the good, shall we? Late on Thursday afternoon, we checked in to the lovely Hotel Del Coronado on, you guessed it, Coronado Island. It's a lovely, historic, haunted hotel. I've always wanted to stay there. Nice, hunh? 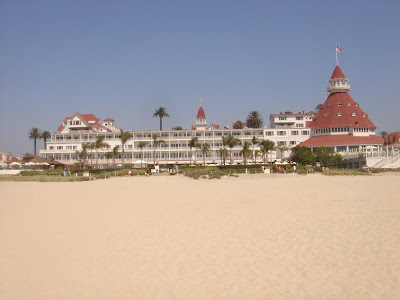 As if that weren't enough, the Mr. in his charming charmingness managed to sweet talk his way into an upgrade to a suite. So we rang in the first night of our vacay looking out the window at this view: 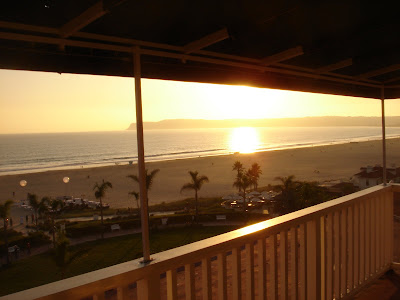 Again, not bad. We watched the beach get invaded by Navy SEALS after dark (apparently they have the run of the island to train on as they wish), ate some totally carb-y Italian food, and went to sleep.

Things continued to look up the next day, as we got up early, hit Starbucks for a Pumpkin Spice Latte, and got to the San Diego Zoo nice and with PANDAS on the brain. No line, everything going well, pandas were cute, etc. 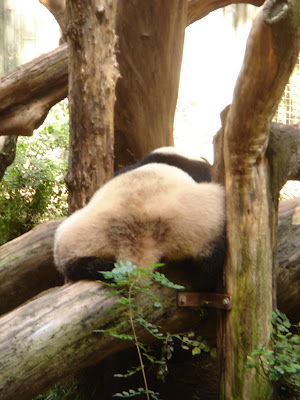 I should have known that furry panda butt was an Omen of Doom. About 10 yards outside of the panda exhibit, I started to feel funky. A little light-headed, a little hot (what else is new?), a little thirsty. I chalked it up to the fact that it was hot, I was pregnant, and, well, those two things seemed to be enough.

We made it to the nearest refreshment stand and I gulped down some water. And then immediately ran to the little pandas room to expel something looking strikingly similar to what that furry panda butt expelled right after I took that picture. It was not pretty -- in fact, the next person to enter the bathroom (while I was still moaning on the stall), exclaimed "UGH!"

Somehow we made it out of the Zoo (that place is FRICKIN' HILLY), and the Mr. drove us back to the hotel. I curled up in a fetal position and slept for two hours, thinking the worst was behind me (ha ha).

But no. I couldn't get to sleep that night, and had a vague feeling that something bad was going to happen. At about 4:00, it did. And then again at 5. And 6. I'm sure you get the picture. I DESTROYED the fancy bathroom. I woke up the poor Mr. (how he was still sleeping at this point was beyond me) and told him what was going on (although I'm pretty sure he got the picture as soon as he took his first conscious breath). He felt my forehead, determined that I was running a fever, got me dressed, and trucked me off to the ER.

Long story short, things are fine, baby is fine, my tummy is now fine, but I spent about 48 hours in lockdown with only Gatorade, bananas and dry toast (oh, and lots of expensive movies from the hotel TV) for company. I felt so bad for ruining the babymoon, and now owe the Mr. a very large (probably sexual) favor for the fact that he carried a specimen of my poop from the hotel back to the hospital for analysis. Is that love, or what?

So, the babymoon was not quite what we expected. But that's not even the worst part.

After ALL THAT POOPING, I was still up 4 pounds at my OB appointment this morning.

Okay, I should not be laughing at your misery, but...I am. Glad you're doing okay now.

And yes, your husband should be up for some kind of marital award. I mean, I've had to carry a jar of 'the boys' to the RE for analysis, but that one takes the cake.

So glad to hear that you're feeling better and that everything is okay. Whatta bummer!

I LOVE The Del!!! It was so good to see those pictures. My grandparents live in Coronado, and I spent every summer there growing up. The Silver Strand is gorgeous, gotta love watching those Navy Seal jogs. ;)

Well...the panda ass was cute, anyway. Sorry you had a crummy getaway, but happy all is ok.

Oh, Dh and I love that Hotel! Sorry about the whole crappy part (ha), but I'm glad you're feeling better.

Oh no! That is awful! :( I cant even imagine! The Mr. definately does deserve something for the poo transfer! :) I hope you are feeling better now though

In the beginning I was going to say how awesome your babymoon was but by the end I was thinking "Oh poor thing!" I agree. I dont know whether to laugh or cry. I think if you were still sick, I'd cry, but since you seem to be fine, I'll say that one day you'll tell your little one this and laugh. (Although the LO will say "ugh!")

Oh, that's awful! I'm so sorry!!! I was really thinking, Oh how great...what a beautiful hotel...I think I saw that on one of those discovery haunted shows...oh, look at the panda butt...and then, oh poor you! That is awful! I am so glad you are better and everything is good with your little one!

Oh no! Hope you're feeling better soon. What a guy, that husband of yours. True love.

This post is sooooo what I needed this morning! I was just bawling from another blog post and now I am simultaneously laughing and crying. I am so sorry you were sick :( I looooooove the Coronado, there are worse places to be sick, I suppose.

You poor thing. I can only imagine how fun your ER visit was as well! I guess you did get to see some panda butt? That 4 pounds can't be right! It is just swelling...Glad you got to hang in SD my hometown. I miss it when I see pics...sigh.

That? Is true love.
So sorry you were truly shitty, and so very glad you are better now and your little one is just fine.
NO fun at all to feel like that, I am so sorry. But yes, I confess, I am sorry but i did laugh just a little bit there as I read along.

Yikes! I'm so glad you're feeling better, but I'm so sorry to hear about your ill-timed illness! At least you saw the pandas, right?